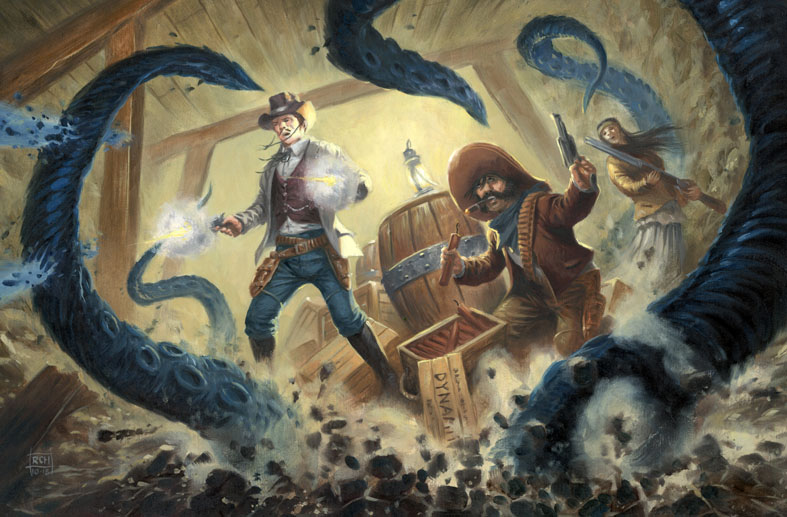 The peak echoed with strange noises at night, people went missing in the mine, and animals on the trail sickened and died. But the gold was plentiful, and frontier folk are used to adversity, so the town grew.

Then, three months ago, the Calamity happened.

Maybe it was a blackpowder accident, or maybe it was the eldritch energy released when the things broke through. Either way, the landslide hit first. Hundreds perished. Soon the survivors would come to envy the dead. The creatures poured out of the mine, slaughtering all in their path. Twisted, evil things. Things that don't belong.

And that's where you come in. You and your posse are fixing to saddle up and bring the fight to the monsters, and send the sons of guns back where they came from. Or die trying.

The setting combines Wild West cowboys and six-shooters with Fantasy elves, orcs and magic, all of it pitted against Eldritch Horror elements. Inspired partly by the board game dungeon-crawler Shadows of Brimstone by Flying Frog Productions.

There will be several pre-made characters available, including an orc outlaw barbarian, a two-gun half-elf fighter, and a spellslinger tiefling sorcerer. If you choose to create your own, they should be level 6, 27 point buy, using any official source plus Matthew Mercer's Gunslinger Fighter archetype. They should also be a suitable fit for a Weird West setting. All characters are considered proficient with firearms and may include in their starting equipment one gun from the list below, plus one light pistol as a backup. You are considered to have enough ammunition to last the adventure, but we'll be tracking reloads and misfires as per the Gunslinger rules!