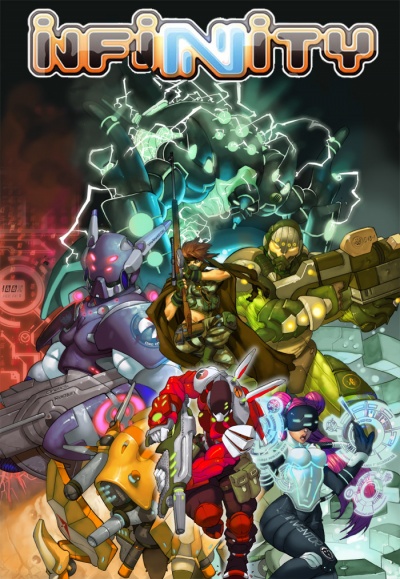 The second great space race has swept humanity into the stars.  We have emerged from the womb of our homeworld and scattered across the galaxy.  Only to find ourselves balanced on the brink.

The second great space race has swept humanity into the stars.  We have emerged from the womb of our homeworld and scattered across the galaxy.  Only to find ourselves balanced on the brink.  Society has fractured into powerful factions sharing a tense truce in the wake of colonial wars.  Beneath the delicate peace they've wrought, a seeting turmoil of covert operations constantly test interstellar relations.  Direct action military conflicts explode in flash conflicts.  Remote dronbots dart between bioengineered super soldiers.  Hackers dance through invisible tactical maelstrom of hellfire military cybersystems.  Titanic TAGs - Tactical Armored Gear - tower above infantry wearing military grade exoskeletons.

The newest planet added to the Human Sphere named Paradiso from the Idyllic appearance revealed on innitial scans of the planet has proved to be the most dangerous of all planets in the human sphere.  The surface covered with dense and vibrant jungle that regrows almost as fast as it's cut down.  Filled with dangerous indigenous lifeforms and toxic flora.  It has become the centre of the most recent colonial conflict, with every major faction of the human sphere attempting to lay claim.  This led to a fierce conflict that reached a fever pitch with the First Discovery, the finding of advanced non-human technological ruins.  Leading to the neccesity of international intercession and the formation of Zulu Point, to provide international non-partisan research of these important relics.

Now the situation has burned down from it's blaze of conflict down to it's normal simmering of international tensions.  But in this lull of tensions will come unexpected events that will send the players into a desperate race to get Off of Paradiso!

Gamemaster: psowden
3 to 6 players
None
Infinity by Corvus Belli the roleplaying game by Modiphius