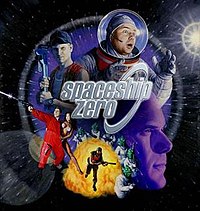 Make the future yours – in the SpaceCorp Planetary Reserve! Based on the 1950s radio serials and ill-fated 1970s German television show of the same name, Spaceship Zero is a planet-hopping universe-imploding amphibious-alien-atomic-raygun-zapping space adventure.

After SpaceCorp’s Better-than-light Drive destroyed the universe, it re-evolved into one in which Earth was conquered by Hydronauts. The unsuspecting crew of the Spaceship Zero were captured by a huge Hydronaut slave ship. Amongst the slaves they discovered a message that might lead them to the human resistance on Earth. The crew has made a lucky escape from the slave ship but a lot of space must be travelled to reach Earth. What will they discover on ASTEROID X!?